Speaker Nancy Pelosi and her fellow House Democrats are seeking a more than $1 trillion federal bailout for state and local governments. This is in addition to the unprecedented aid Congress already has sent.

Instead of waiting on a handout from Washington, states should clear the way for a more robust economic recovery by addressing their unsustainable finances.

States and local government spending has increased over the recent past, demonstrating room for targeted spending cuts.

That amounts to a 30% increase in the real cost of state and local government over just two decades, even without the thousands of dollars per person the federal government sends to states and localities through a wide variety of programs.

But not all states spend equally. As of 2017, Florida, Georgia, and Arizona spent about $5,800 per person on state and local governments, but New York spent more than $11,700 per person. Financing state and local governments’ lost revenues would mean spending twice as much on New Yorkers as on residents in more frugal states.

The gap between big-spending states and fiscally responsible states has increased markedly over the last two decades, as this graph of state-level spending changes from 2000 to 2019 demonstrates. 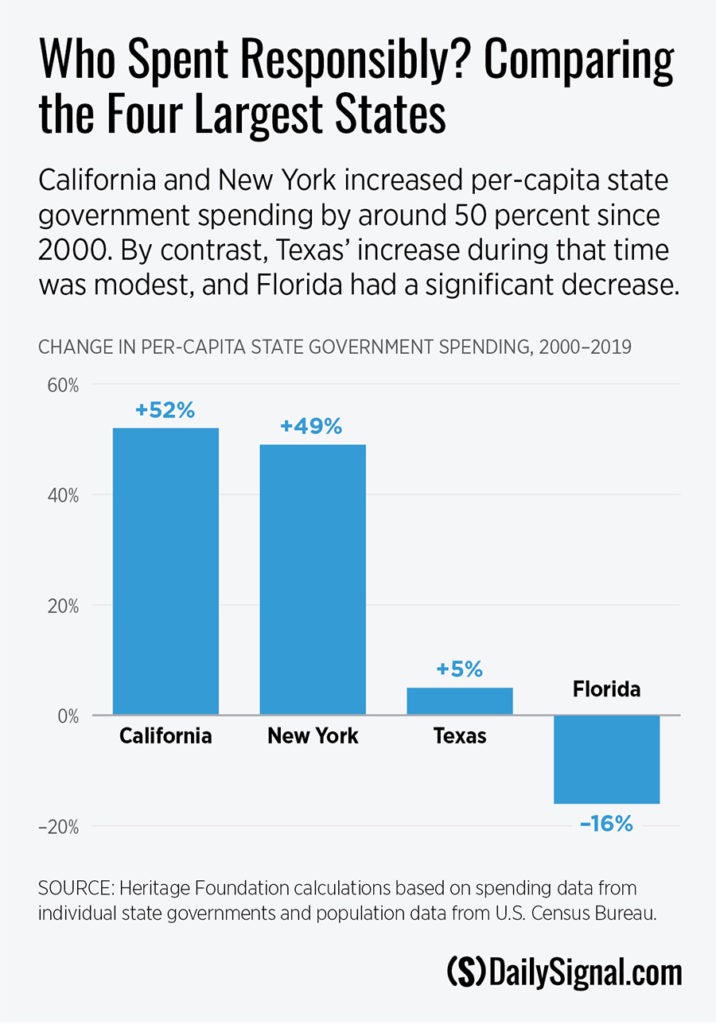 Meanwhile, Texas has kept spending about flat, and Florida has reduced spending levels by 16%. Former Florida Gov. Rick Scott explained recently in The Wall Street Journal how fiscal discipline has set up his state for fiscal success amid this crisis.

States and localities could save more than $500 billion a year by trimming their per-person spending to where it was in 2000. This would more than cover any temporary reductions in revenue and help set the path for a stronger economic recovery.

During past recessions, countries that addressed their debt crises through spending cuts were able to return to economic growth more quickly. Those that relied on tax increases but did not reduce spending or address underlying fiscal problems, such as underfunded and overpromised pensions, experienced “deep and prolonged recessions.”

A federal bailout could prop up failing states temporarily but would not fix their underlying fiscal challenges. Instead, historical evidence suggests that every federal bailout dollar will increase state taxes by between 33 and 42 cents—the last thing residents in debt-ridden economically deprived states need.

Prolonged recessions and continued budget problems are the most likely outcome of a federal bailout for state budgets.

In addition to hundreds of billions in direct aid for the pandemic response and Federal Reserve loans for lost revenue, Congress has authorized more than $1.3 trillion in federal payments to businesses and individuals. These programs will help buoy tax revenues in every state, although much of the gains won’t be realized until states reopen.

States that still have shortfalls need to do what ordinary Americans and businesses do in such situations—make tough budgeting choices and reduce spending.

Rather than asking for a federal handout, California, Illinois, and New York should try to make their budgets look more like those of Texas and Florida.

Reducing spending in times of crisis will set up states for a successful recovery by keeping taxes low and ensuring confidence in the state’s financial future.

Reprinted with Permission from - Daily Signal by - Adam Michel

Just get out and vote in November. If you live in one of these fiscally impaired states, remember these charts when you do.

People who live in NY, Illinois and California should have to stay in these states for life!!!

“A federal bailout could prop up failing states temporarily but would not fix their underlying fiscal challenges. Instead, historical evidence suggests that every federal bailout dollar will increase state taxes by between 33 and 42 cents—the last thing residents in debt-ridden economically deprived states need.”

That’s not the half of it. Don’t know why articles aren’t mentioning inflation, but the law of supply and demand tells us that when the money supply increases, the value of each dollar decreases.

The government has just pumped an enormous amount of newly “printed” money into the system. At the same time, businesses are closed and closing. That means fewer goods and services available with more money to buy them. Inflation will skyrocket, which means any savings you have and any Social Security you get will be worth less and less.

So that means, not only do you need your job back; you’re going to need a raise or more work. Time to start doing any, honest work you can do.

What is sad is all these leftist democrat voters are fleeing the high tax states of not only New York but other liberal high tax states and fleeing to Georgia and Florida and I suppose Arizona and bringing they’re liberal ideas here. Stay home and clean up your mess were doing ok here without you.

Until Pelosi and her liberal democratic Representatives come out of
Of their gated mansions and return to Washington and do their jobs they should not get paid!!!

So Andrew Guomo is hailed as a great leader, yet his state is losing more and more businesses and professionals due to the high taxes. Expenses keep increasing and the city is in turmoil. Guomo needs to stop blasting Trump and the Republicans and begin to look inside as to what his state is doing. He also needs to stop asking the Federal Government for handouts and be more responsible with his budget.

As a rule, Democrat politicians have NO common sense, which is why most of the Democratically controlled states are in financial trouble!

How many are questioning where the money is going to come from to pay for/pay back these huge $$Trillions Congress is pumping out “to aid/assist those millions who lost jobs, closed businesses, etc.”. AND why is money from these bills going to EVERYONE, especially to those who are still drawing paychecks because they’re still working at their jobs or from home? Why is it going to Soc Sec recipients as well? IF it’s to help those struggling financially, the aid for them is diminished because it’s going to those who really don’t need it! Then there are large amounts to The Kennedy Center for Arts, Congressional & staff benefits, and lots of other PORK programs having nothing to do with the current situation. How many other AMAC members/readers are SICK OF CONGRESSIONAL DEMOCRATS turning real needs into PORK spending?

In addition to Federal funds, you must take into consideration all the other taxes shouldered by workers, business owners and residents in New York or California.

Government has robbed social security to spend wildly on pet projects. Now SS is broke. Yet socialist/globalist Dems want paycheck for all. Where will gov get money to give paycheck for all if social security trust cannot be robbed by them? Tax the rich won’t work. Rich will move or create more tax shelters. Burden will fall on hard working middle class. In the end there will only be rich and poor—less middle class—just like China and Russia.

There has never been a mystery here. The people never really see the money because it is used as campaign pay backs and personal accounts. It should be very easy to track every single penny but politicians refuse. It should be public record. Also if you are an elected politician all offshore bank accounts should be exposed.

This is just what the blue states do” WHINE” under normal times they make bad decisions. Their goal is to be powerful. No matter who it hurts. I see this now that Governor’s are making the decision to open. Pretty soon since they were LATE opening the whining and saying it isn’t fair. I certainly hope the American people are paying attention.

If states can’t manage their finances they should not be allowed to use federal aide to bailout their incompetence! That would include subsidizing illegal immigrants.

Welcome to California, the state in which I reside (at least for now). Yes, California is part of the problem, and not part of the solution.
Thought the following “poem” might put things in perspective here:

☭alifornia, here I come!
Just what you need, another dumb-dumb!
Wish I may, wish I might,
I’ll be sleeping on your streets tonight!
Bright and early tomorrow morn, without a doubt,
I’ll show up at your welfare office with both hands out.
I want everything that you offer for free.
After all, I’m only looking out for me!
Don’t want to work or pay any tax.
I only want to sponge and relax.
For when all is said and done,
I’m only here for the sun and fun!
☭alifornia, here I come!

Drain the Swamp. Vote dumocrats out.

Cmon nancy…in her latest failure the losers included $$$ for law illegals!
What don’t these dumbas* politicians understand about taking care of Citizens!

If some law gets rammed down my throat forcing me to pay with my taxes for the out of control spending by the leftist led states on both coasts I, and I hope a lOT of people join me, will simply cease all income tax payments and to hell with the government should they come after me. LIVE FREE OR DIE. It is LONG PAST the time for us to stand up for our freedom even if and especially if it means we have to use our Second Amendment for its true intended purpose……to fight back against a tyrannical government.

Well, with the Democrats, it’s always been about the money! I started paying attention to politics when I retired from the military almost 30 years ago, and I can say, unequivocally, that the Democrats replaced the Republicans as the “Money People”! Don’t believe it? Just look at how many Democrat Millionaires and Billionaires there are! Old Money might be GOP, but, the Democrats are right there with them, and BOTH republican and Democrat are for THEMSELVES, not the people who vote for them…